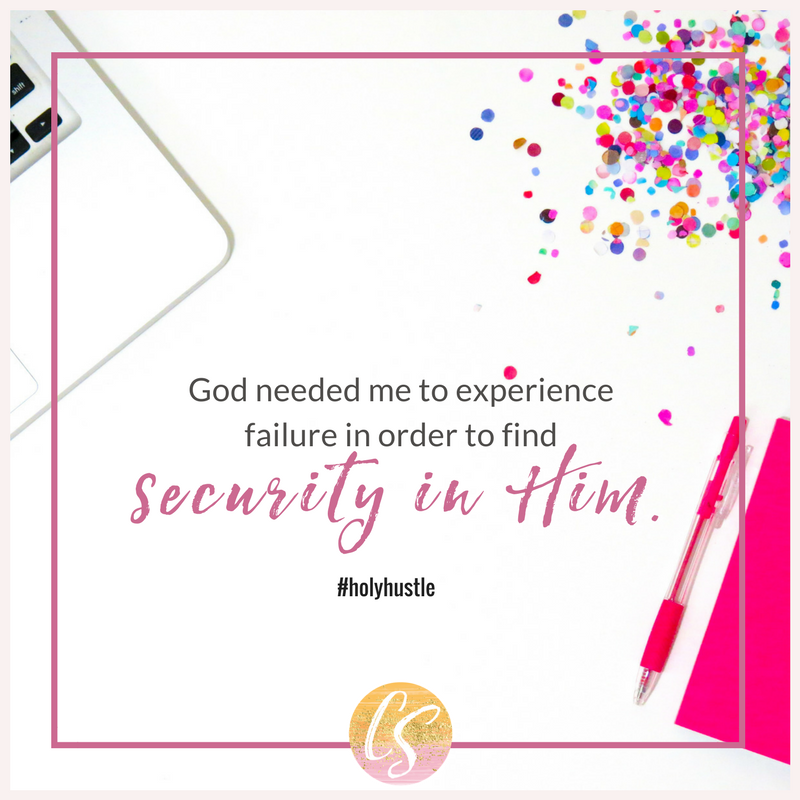 I was having a conversation with a friend last week about writing, book publishing, and where God has taken us over the last few years and we came to an interesting conclusion.

We wouldn’t be where we are today without failure.

As we both began to  list the different activities we used to be part of, the projects we’d started, the jobs we’d held, I began to see how God needed me to experience failure in order to find security in Him. Without those failures, I wouldn’t have the stories to tell, the compassion for others, or the skills I’ve developed that He has strengthened over the years.

In addition to my friend’s amazing list of tried & failed activities, I thought of my own list. And then thought I’d share it with you. Some will look like obvious areas of failure, while others were simply activities that I gave up – for one reason or another. But don’t we often count the end of a season as a failure, as if we could and should keep them going forever?

And that’s just the start of the list. I’ve tried and failed at so many things. eBooks that no one ever bought. Free downloads on this site that no one ever signed up for. Jobs I’ve applied for, interviewed for, and was never hired for. Failure is tricky. The world tells us we should avoid it at all costs, and for a long time I only did activities I knew I would be good at for that very reason. I only wanted achievements added to my resume. But I’ve learned recently that growth – spiritual, emotional, and physical – only come when you do more than what you already know you can accomplish.

Last month we took some time to redefine success. This month we’re going to tackle failure – what it looks like, how we can redefine it so we stop fearing it, and what God might want us to do with it.

In the meantime, my friend Lisa Whittle has done a wonderful podcast on this topic that you should go listen to – it’s only five minutes, but the wisdom she shares in a few short minutes makes it one of my favorite podcasts on my morning drive!

Previous Post: « You Can’t Do It
Next Post: Stumbling Blocks or Stepping Stones »
#onefinepepperstine hopes you have a great weekend

In the fall, we saved pumpkin seeds to plant. We h

"At the beach, life is different. Time doesn’t m

A new addition to #onefinestinehome this year: pum